Posted on Tuesday, Feb 05 2008 @ 00:00 CET by Thomas De Maesschalck
Polymer Vision, a subdivision of Philips, unveiled an updated version of their Readius. We first heard about this device in September 2005 and this week the firm announced the first version of the Readius will be shipped this summer.

The Readius will be a UMTS/HSDPA and GSM/GPRS/EDGE phone with a fold-out 5" e-paper display with a 320 x 240 pixel resolution.

Processing power is defined by a 400 MHz ARM11 processor which pumps out enough power to play the latest mobile media formats including MP3s and audiobooks on the Microsoft WinCE platform. The device features 128MB of RAM and 256MB of internal storage. A Micro SDHC slot allows the use of removable high-capacity flash media for storage of media and documents, currently allowing storage capacities of up to 32GB of SDHC with a single flash chip. There is a built-in USB 2.0 port allows synchronization with Microsoft Windows-based PCs using Microsoft's ActiveSync software.

Features such as standard POP3 and IMAP email account access through an ISP or web based email services also add to the device making it a type of smart phone. This first generation Readius is stated to shine as a text reader with e-books and documents. The e-book reader will most likely be the main selling point of this device as the display is a 16 color grayscale display.

The Readius internet portal will be used to push content to the device upon user configuration of the device's user interface and content preferences. Details on this internet portal should become available as we close in on the launch date. 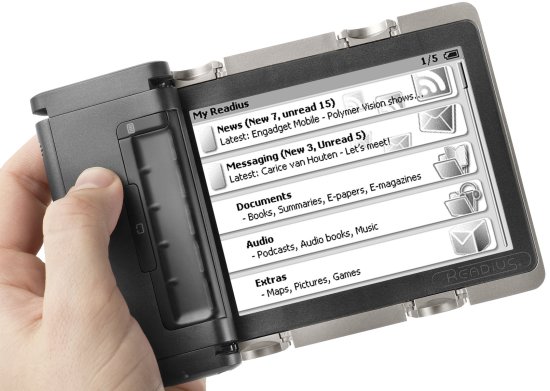 This summer the device will be released and within the next 4-5 years we can expect a new version with a 8" color display.