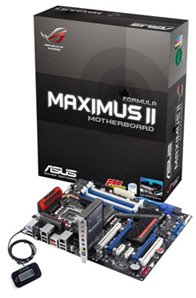 Asus has officially released the ROG Maximus II Formula motherboard, this model is based on the Intel P45 chipset and features a SupremeFX X-Fi audio card.

High-Fidelity Environmental Sounds with SupremeFX X-Fi
The Republic of Gamers (ROG) is dedicated to delivering unsurpassed gaming experiences for the serious gamer. In the ROG Maximus II Formula, the bundled new SupremeFX X-Fi audio card provides gamers with life-like sound effects and 3D surround sounds to fully immerse them into their games. With an emphasis on high quality design, the Supreme FX X-Fi utilizes the ADI 2000B audio codec, Creative X-Fi suite, CMSS3D and Crystalizer technologies, and authentic EAX sound effects to produce top-notch virtual 3D surround sounds to bring gamers one step closer to “being really there” in their games.

Easily Upgrade CPUs with CPU Level Up
With CPU Level Up, gamers will be able to easily obtain CPU boosts to suit their gaming needs. All they have to do is select their desired CPU model from a list in the BIOS. Once it is chosen, the system will do the rest of the work and fine-tune the original processor to run at the speed of the desired CPU. Obtaining CPU boosts never been as easier!

Extreme Engine Design for Exceptional Performance
ASUS’ legendary engineering prowess has culminated in the new ROG Extreme Engine – a next-generation multi-phase power design that provides additional overclocking headroom for extreme user experiences. Comprising of a 16-phase power design for the CPU, 2-phase for memory and 3-phase for the north bridge; Extreme Engine will provide users with additional voltage options in the BIOS for higher performances. With only the best quality components used, stable power to components provides reliable operations; while a power efficiency of up to 96% and automatic power management ensure less energy is wasted and less heat produced – allowing gamers to enjoy the most stable potentials for the ultimate gaming experience.