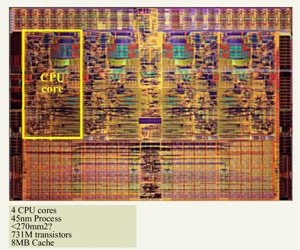 Unless problems arise, Intel is planning to release its Nehalem processors in week 40 and week 44. The workstation and server Nehalem CPUs are slated for early September and the desktop parts are expected four weeks later.

Well, maybe. Between hearing the news and writing the news there was an insinuation that Intel might push it back because the new chipset and architecture might have a few issues.

We're not talking G45 delays, but we're aware some motherboard engineers are upset with Intel because even this late in the day it's suggesting component changes, which could affect design and sampling schedules. With only six weeks to go Intel might be giving the Taiwanese a few ulcers!

We've also been told that Intel's premium X58 chipset alone will cost $70, making the boards quite expensive, but this is not unexpected and by no means completely insane like Nvidia launching the nForce 790i Ultra SLI with a chipset that cost $100+. Instead just expect new technologies to charge a happy premium for the time being.