NVIDIA announced little new products at NVISION but at the final day of the event there was a pretty exciting announcement, the graphics card maker announced it will allow native SLI support on the upcoming Intel X58 chipset.

While this announcement is great news, do not think that every Intel X58 motherboard released will have SLI support. To the contrary, NVIDIA will now be hand testing each motherboard model that a board vendor would like to enable SLI on for compatibility and approval before they can use the SLI logo or name. While this at first seems like a positive thing to do (cutting down on user issues) in reality it is all part of business decision to continue to control the SLI brand.

Motherboards that wish to have the SLI technology enabled will have to submitted to NVIDIA's team and then the motherboard vendor will get a "cookie" - a piece of code that goes into the SBIOS on the motherboard that will be searched for by the NVIDIA GPU driver to enable the SLI technology. This is an attempt to get around the issue of passing out completely unlocked drivers that could enable SLI on all motherboards by requiring a hardware verification of some kind. It is likely that this cookie will be cracked within days if not hours of the platforms getting into enthusiast hands but NVIDIA is really only hoping to control OEMs and ODMs in this regard.

Of course, nothing is free in NVIDIA-world: motherboard vendors and system builders that wish to make an SLI-ready X58 motherboard will be paying a fee. Call it a licensing fee, a royalty, whatever you want but the fact is that NVIDIA wants some cash for the SLI name and they are going to get it; with or without selling you a physical chip like the nForce 200. I am actually curious how close the price of the nForce 200 chip was to the price of the SLI licensing agreement...

The following diagrams show the supported configurations for SLI licensed designs on the X58, these motherboards will basically offer all configs most people will need. Only if you want triple or (upcoming) quad SLI with four slots at x16 you'll need the nForce 200 chip but even NVIDIA admits the PCIe bandwidth isn't the bottleneck, expect in some CUDA applications. 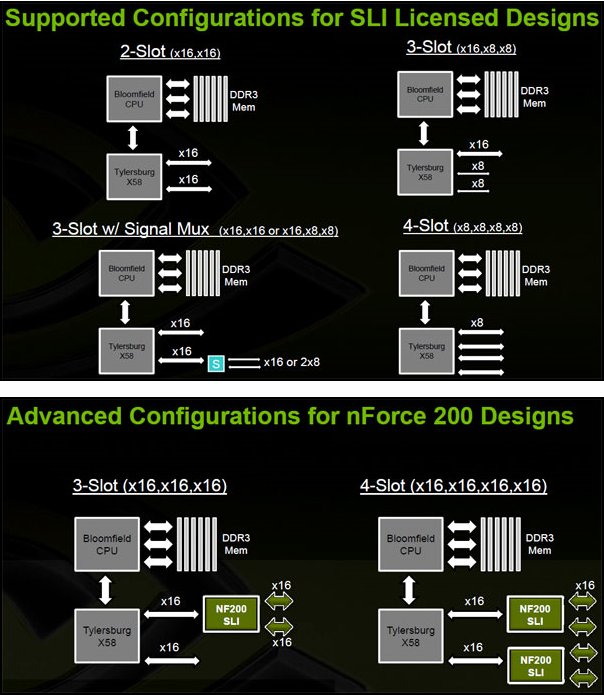