Posted on Friday, May 03 2013 @ 13:29 CEST by Thomas De Maesschalck
Epic Games announced a WebGL-based version of its Epic Citadel demo, you can try it out over here. At present, Epic recommends the latest nightly Firefox release for optimal performance. The regular Firefox release will also function, but it's slower than Firefox Nightly, and Chrome currently crashes, but this issue should be resolved soon. Other than that, Internet Explorer does not support WebGL in current versions, and Opera nor Safari are currently compatible with Epic Citadel.

Q: Can you explain a little about the technology that makes this possible?

A. Mozilla is working on a new way to bring content to the Web and have it run at near native speeds. Using Emscripten to cross-compile C and C++ applications into JavaScript, Mozilla can bring large, high-performance applications to HTML5. This technology is already cross-browser as it outputs standard compliant JavaScript. The output from Emscripten also follows a stricter form of JavaScript called asm.js. It’s possible to optimize for this subset, as has been done in Firefox, to run within 2x of native speeds. Existing web standards such as WebGL and other Web APIs provide the hardware access needed to deliver incredible gaming experiences as shown by the Unreal Engine 3-powered Epic Citadel demo. 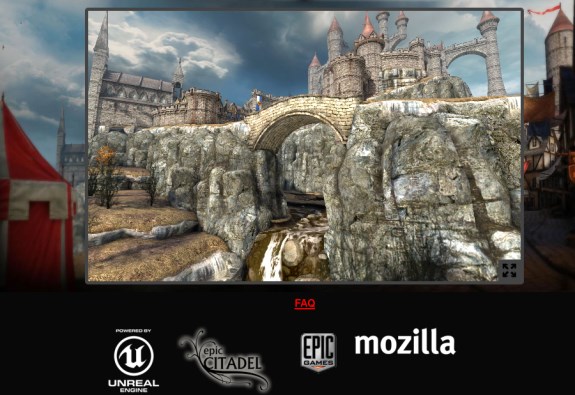