Posted on Friday, Aug 02 2013 @ 13:25 CEST by Thomas De Maesschalck
Despite Valve's stand against Windows 8, it seems Steam users are picking up Microsoft's new operating system at a much quicker pace than the general market. While Windows 8 has a marketshare of just 5.4 percent in the global market, the operating system is now used by 14.12 percent of Steam gamers. This means Windows 8 is now the second-most used OS on Steam, but it's still far behind Windows 7's 64.91 percent. Despite Valve's efforts to boost Linux gaming, a mere 0.96 percent of Steam gamers run a Linux distro.

In late July, Newell said that the launch of Windows 8 would cause many major PC OEMs to "exit the market". Valve has been trying to expand Steam's library of games to include more Linux titles, but the latest Steam hardware numbers show that Linux users are still a tiny fraction of its total audience. By contrast, Windows 8 has seen much better acceptance by Steam users in comparison to the overall PC market. 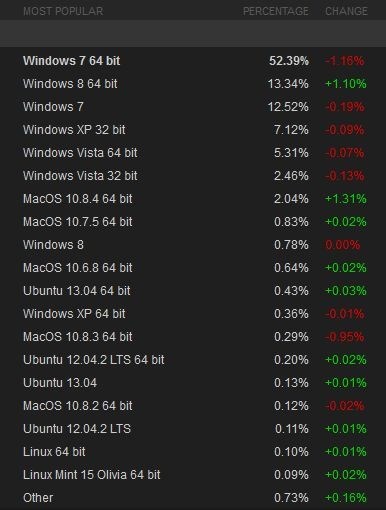