“We’ve had a lot of customer interest in expanding our G1-Killer gaming motherboard range to include an AMD platform model.” commented Henry Kao, Vice President of GIGABYTE Motherboard Business Unit. ”By also developing unique audio features that make a real difference to the overall experience, we’re confident this board will be a real hit with gamers and audiophiles alike.”

USB DAC-UP
Featuring a gold plated USB 2.0 port, GIGABYTE USB DAC-UP provides clean, noise-free power delivery to your Digital-to-Analog Converter. DACs can be sensitive to fluctuations in power from the other USB ports, which is why GIGABYTE USB DAC-UP takes advantage of an isolated power source that minimizes potential fluctuations and ensures the best audio experience possible.

GIGABYTE USB DAC-UP also allows the port to be configured in BIOS for enthusiast system configurations which do not require USB power to the DAC. This makes it suitable for high-end audio enthusiasts building extreme fidelity audio systems.

Upgradable Onboard OP-Amp
GIGABYTE motherboards are the world’s first to feature an onboard operational amplifier (OP-Amp). OP-Amps are commonly found in high-end audio equipment and offer not only amplification of the audio signal, but a superior audio experience generally. The motherboard’s OP-Amp is mounted on a socket which allows users to physically switch out and try different OP-Amps which offer distinct and nuanced properties that make the audio clearer, punchier and more life-like. Additional OP-Amps can be purchased separately to further expand audio capabilities.

Gold Audio Plated Hardware
The GIGABYTE G1.Sniper A88X motherboard uses top quality gold plated hardware for improved connectivity and long lasting durability for the USB DAC-UP port and audio connectors. Gold has superb signal conductivity and will not tarnish over extended periods of use. The Realtek ALC898 audio processor is also shielded by a gold-plated cover which eliminates electrostatic interference. 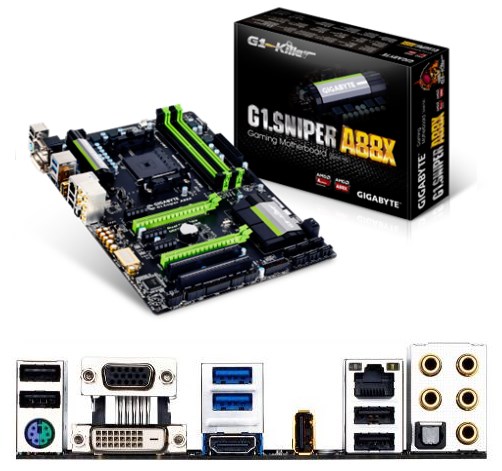