Posted on Monday, Dec 16 2013 @ 15:21 CET by Thomas De Maesschalck
The Tech Report came across a leaked roadmap from notebook maker Clevo that reveals several upcoming notebook graphics cards from NVIDIA. If the slide is correct, NVIDIA is planning to roll out its GeForce GTX 800M series in February 2014. The lineup reportedly features the GeForce GTX 880M with 8GB memory, a GeForce GTX 870M with 6GB of memory and a GeForce GTX 860M with 4GB memory. These are all discrete MXM form factor cards.

Another slide also reveals three "on board" offerings, these are likely BGA versions that will be soldered onto the laptop's motherboard. This lineup includes the GeForce GTX 840M, GTX 850M and also a BGA version of the GTX 860M.

Of course, none of this tells us what graphics architecture will make the GTX 800M series tick. These could simply be re-badged Kepler chips. Going by the memory capacities alone, though, I wouldn't be surprised if there were a little next-gen goodness inside the GTX 870M and GTX 880M. 6-8GB is a lot of memory for a consumer-focused mobile GPU. Nvidia's current mobile flagship, the GeForce GTX 780M, comes with 4GB of GDDR5, and I'm not sure Nvidia would have much to gain from giving the same silicon even more RAM to play with. 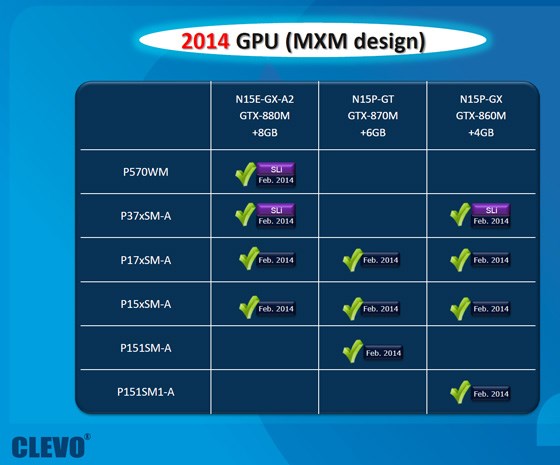