Details of Intel's upcoming Haswell-E processor lineup hit the web. Expected to be launched later this year, this new high-end Core i7 series will consist of three models; the Core i7-5820K, Core i7-5930K and Core i7-5960X. Despite sticking to the LGA2011 form factor, Haswell-E requires a motherboard with the new X99 chipset due to support for DDR4 memory.

First up is the six-core Core i7-5820K, this chip will likely cost under $400 but it's unknown whether it will support HyperThreading. It has a 3.3GHz clockspeed, an unknown Turbo Boost, 15MB L3 cache, and an unlocker BClk multiplier. The only downside is that the PCI Express configuration is limited to 1x16 + 1x8 + 1x4.

The Core i7-5960X is the flagship model, this eight-core definitely has HyperThreading and features 16 logical CPUs. The stock frequency is limited to 3.0GHz though but you do get 20MB L3 cache an 2x16 + 1x8 PCIe.

All three Haswell-E processors have a 140W TDP rating. 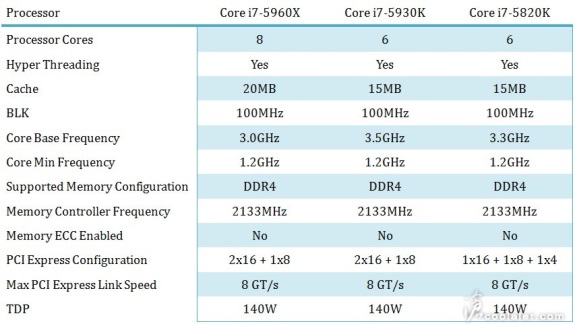