Is this the new Start Menu?

Posted on Tuesday, Jul 15 2014 @ 16:33 CEST by Thomas De Maesschalck
Neowin came across a screenshot of what is claimed to be the new Start Menu. The new Start Menu seems a mix of the old Start Menu and Windows 8's Start Screen, the left side features pinned and commonly used programs while the right side focuses on Metro.

We do know that this is still an early build of next generation of Windows and we will have more to report on that tomorrow. So, don't get too caught up in the minor details as there will be other enhancements to the desktop before Threshold is released. One item about the image that was throwing off users previously is that is says Win 8.1 Pro in the bottom corner. We have spoken to a source close to Microsoft who says that this image appears to be legitimate, and that these builds inside of Microsoft still use this branding, so this is not a big deal.

DailyTech does point out though that one key difference with the old Start Menu is the lack of a folder-based system:

One major change is the lack of a folder-based system for accessing apps in the start menu. This may irk some power users, however, it seems that typically users own use one key executable per major app anyways, and generally giving them that executable faster is probably the most efficient option. 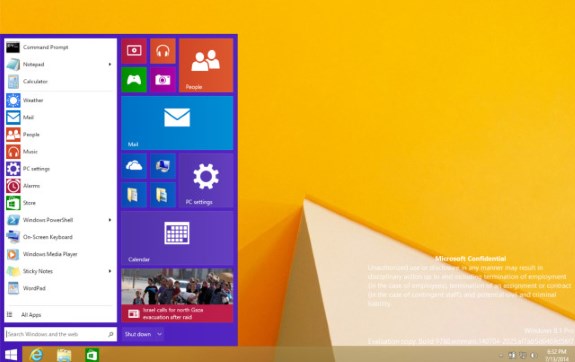