The best cost/performance solution for efficient PC's
MSI A68H series motherboards are available in microATX form factor and offer a great choice in connectivity with a Dothill RAID controller, onboard LAN, PCI Express 3.0, SATA and up to 10 USB ports.

Military Class Essentials
The core of Military Class 4 is based on the essential elements which increase your stability in the worst conditions. Humidity protection and high temperature protection ensure system stability in each environment, no matter what. The new structure of the PCB limits EMI emission. On top of that, all connectors have ESD protection in order to prevent short-circuiting.

OC Genie 4, Click BIOS 4 & Command Center
The MSI A68H series motherboards are equipped with many exclusive technologies, including the one-second overclocking OC Genie 4, the easy to use Click BIOS 4 and the Command Center software that combines features such as monitoring, tuning and controlling of your hardware. The unprecedented level of flexibility and control offered in MSI's unique hard- and software design puts you in the driver's seat of your motherboards configuration. 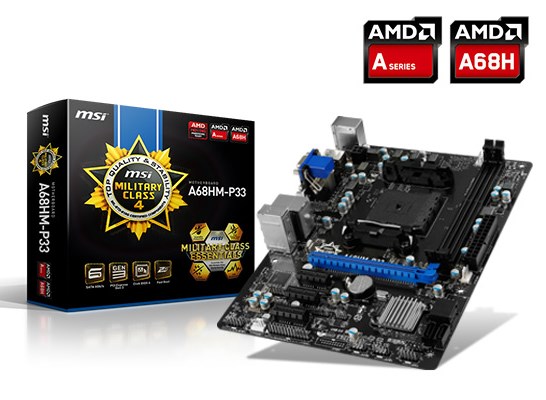