Intel revealed an updated version of its desktop roadmap at the Intel Technology Conference 2014 in Athens.

The first thing you can see on the roadmap is that Intel's flagship lineup will remain unchanged or the foreseeable future, the Haswell-E will continue to serve the ultra-high-end market until at least the end of Q3 2015.

Next the roadmap also officially reveals that Skylake is planned for Q2 2015 as well, this chip is part of the same S-series as Broadwell Unlocked and fits in the same 35W to 95W TDP range. Skylake uses the LGA1151 socket and requires a new motherboard with a 100 Series chipset.

The third new chip coming in Q2 2015 is Braswell, this J-series SoC has a 10W TDP and is intended for the most compact and passive desktop systems. 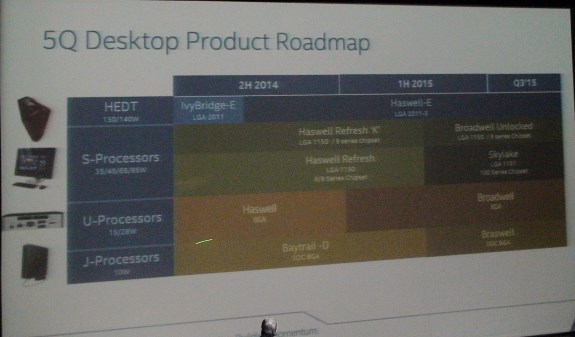