These kind of articles are best taken with a grain of salt, but if a newly leaked set of benchmark results that surfaced at ChipHell is to be trusted, AMD's future Radeon R9 390X "Captain Jack" GPU may beat NVIDIA's GeForce GTX 980 graphics card by up to 20 percent. The same leaker also produced some load power consumption figures which claim the Captain Jack GPU consumes around 197W, just 12W more than a GeForce GTX 980.

The GPU was benchmarked against a slew of other cards, on a bunch of different games. These games were all benchmarked, which provided a heavily-stacked average FPS, versing this mystery card against a bunch of other cards on the market. You can see in the image above, that the "Captain Jack" sample kicks some serious ass with 65.6FPS average, against the 50.1FPS average of the R9 290X and the 56.6FPS average of NVIDIA's GeForce GTX 980. 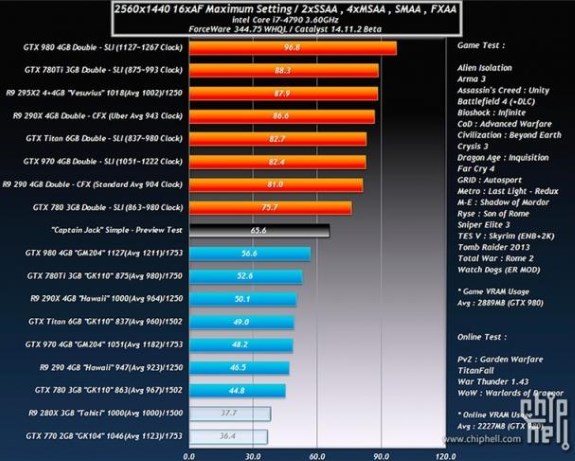