Posted on Monday, May 11 2015 @ 13:17 CEST by Thomas De Maesschalck
A recent presentation by Seagate's Alvin Cox, who is also chairman of the Joint Electron Device Engineering Council (JEDEC), shows data retention time on solid state disks is roughly halved for every 5 degrees Celsius rise in temperature in the area where the SSD is stored.

Consumer class SSDs can store data for up to two years before the standard drops, but when it comes to SSDs used by enterprises, the drives are only expected to retain data for a period of three months – a fact confirmed by Samsung, Seagate and Intel's own ratings on their products. Security firm KoreLogic is concerned that far too many people are now using SSDs in both consumer and enterprise applications, which is clearly not a great idea if the data is important and might be needed for a longer period that three months.

Security firm Kore Logic explains that in cases when long-term data retention is required, it's a good idea to backup the data on a mechanical disk.

What started this look into SSDs? An imaging job of a laptop SSD left in storage for well over the 3-month minimum retention period quoted by the manufacturer of the drive before it was turned over to us. This drive had a large number of bad sectors identified during the imaging period. Not knowing the history, I did not consider the possibility of data loss due to the drive being in storage. Later, I learned that the drive was functioning well when it had been placed into storage. When returned to its owner a couple of months after the imaging, the system would not even recognize the drive as a valid boot device. Fortunately, the user data and files were preserved in the drive image that had been taken, thus there was no net loss.

Now imagine a situation in which an SSD was stored in legal hold where the data was no longer available for imaging, much less use in court. Ignorance of the technology is no excuse, and I am sure the opposing counsel would enjoy the opportunity to let the court know of the "negligent" evidence handling in the matter. Bottom line - image it now … and use a mechanical disk.

Here is a chart that shows how many weeks data is safe before you can expect issues like (minor) data corruption: 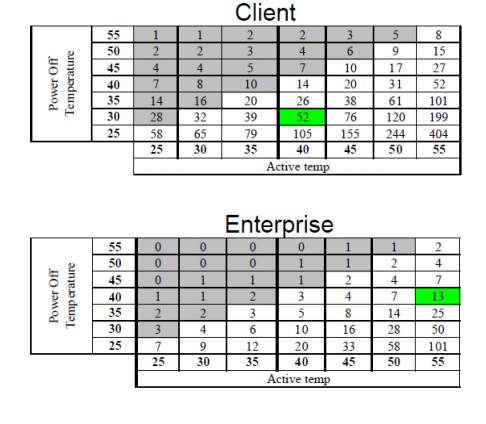