Ahead of the start of the Intel Developer Forum in San Francisco later today, Intel published a whitepaper about its Graphic Gen9 architecture which is found in the new Skylake processors.

The execution units (EUs) on Intel's Graphics Gen9 are grouped together in clusters referred to as a subslice. Each subslice of most Gen9-based products has 8 EUs and each EU is capable is running 7 threads each, meaning a single subslice can run 56 simultaneous threads.

The Intel Core i7 processor 6700K with Intel HD Graphics 530 features a single slice with three subslices, meaning it offers a total of 24 EUs capable of running 168 hardware threads. The GT2 integrated graphics part makes up about 40 percent of the die area of the 6700K, eDRAM support is optional with support for 64MB to 128MB of eDRAM. A more advanced version is the Skylake GT3 graphics, this model consists of two slices offering a grand total of 48 EUs, and then you'll also have GT4 with three slices offering 72 EUs. For a full summary of the changes in Skylake's iGPU, head over to Legit Reviews.

NEW CHANGES FOR INTEL PROCESSOR GRAPHICS GEN9
Intel processor graphics gen9 includes many refinements throughout the micro architecture and supporting software, over Intel processor graphics gen8. Generally, these changes are across the domains of memory hierarchy, compute capability, and product configuration. They are briefly summarized here, with more detail integrated throughput the paper.


And here's an overview of the HD Graphics 530 specifications and peak performance: 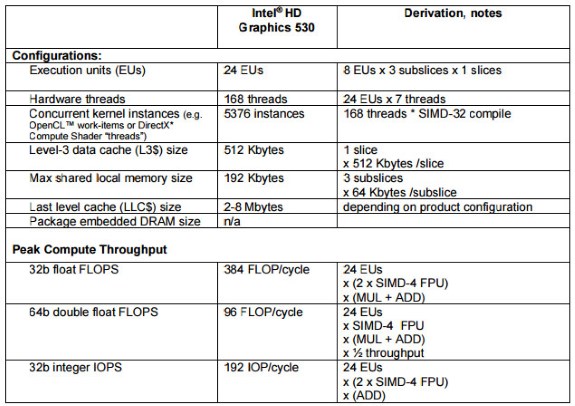