Posted on Wednesday, Feb 03 2016 @ 11:18 CET by Thomas De Maesschalck
OCZ announces the Trion 150, a new line of budget solid state disks with 15nm TLC NAND flash memory from Toshiba. The disks promise up to 550MB/s read speeds, up to 530MB/s write performance and up to 64,000 random 4K write IOPS. This is the maximum performance of the 960GB model, the lower capacity models have lower write speed and lower IOPS performance.

“Our Trion 100 series solid state drives quickly became a top seller for us and are popular among end users seeking a performance boost over hard drives at a very reasonable price,” said Steve Fingerhut, Sr. Vice President and GM of SSD BU, at Toshiba America Electronics Corporation. “We are continually looking for ways to improve both SSD real world performance and value to end users and are pleased to introduce the new Trion 150 series which leverages the latest Toshiba 15nm Triple-Level Cell NAND flash to deliver an even better storage solution for value oriented mobile and desktop users.”

Stringent reliability and quality procedures are incorporated into every OCZ series drive; however, in the unlikely event that a drive needs to be replaced, Trion 150 is protected by OCZ’s ShieldPlus Warranty for 3 years. This industry-leading approach to service provides peace of mind with an elite, worry-free customer service experience which eliminates all the hassle and cost surrounding traditional support and warranty claims consumers often have to deal with. 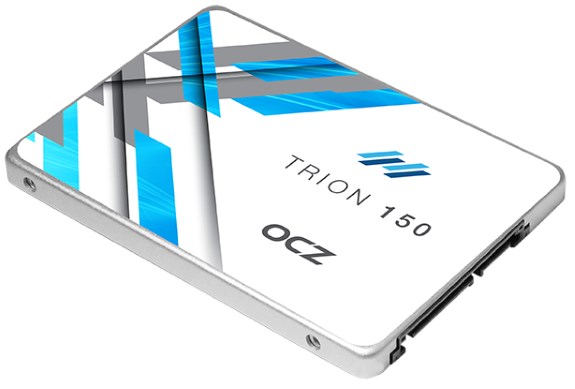