Posted on Thursday, Feb 25 2016 @ 12:32 CET by Thomas De Maesschalck
Zotac announces the Sonix PCIe SSD, a new model with 480GB capacity that uses the Phison E7 controller and Toshiba MLC NAND flash memory. The device uses the PCIe 3.0 x4 and NVMe 1.2 interface, it has 512MB DDR3 cache memory and promises read speeds of up to 2600MB/s and write speeds of up to 1300MB/s. More detailed performance figures aren't mentioned in Zotac's press release.

SONIX features NVMe 1.2 PCIE Gen3 interface with x4 lanes capable of delivering sequential read and write speeds up to 2,600 MBps and 1,300 MBps for ultraresponsive performance. The SSD is powered by a Phison E7 controller and stacked with Toshiba MLC flash memory. Protected by technologies including End-to-end Data Path Protection and Dynamic Wear Leveling, SONIX is fast and reliable with an MTBF of up to 2,000,000 hours.

SONIX is a flexible addition for any system as it comes bundled with standard and low-profile brackets to fit even in slim profile system builds. A durable metal housing with a stylish minimal design protect all things fast. 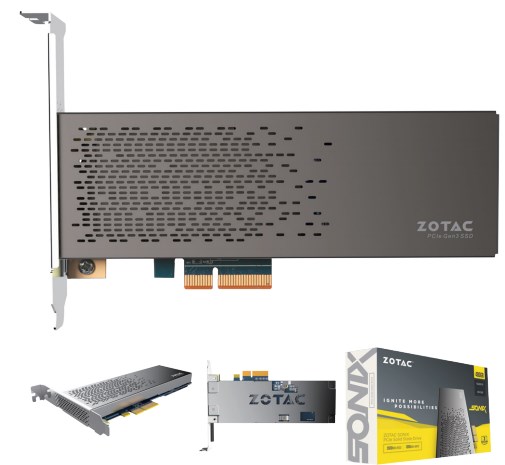