Posted on Tuesday, Mar 08 2016 @ 15:15 CET by Thomas De Maesschalck
Intel recently closed the lid on the overclocking of non-K series Skylake processors by rolling out a BIOS microcode update but motherboard maker ASRock isn't giving up yet. I'm not sure how Intel is going to respond to this one, but ASRock just announced its Fatal1ty H170 Gaming K4 HYPER and Fatal1ty B150 Gaming K4 HYPER motherboards. These two products feature an external clock generator chip to give cadence to the CPU, allowing you to increase the base clock frequency of non-K series CPUs in increments of 0.065MHz!

The two use an external clock-generator chip to give cadence to the CPU, circumventing the on-die clock-generator Intel has been using for the past several generations of Core processors.

With this contraption, you can increase base clock frequency on non-K Core processors in fine increments of 0.0625 MHz, as well as tweak memory clock. Its star attraction a 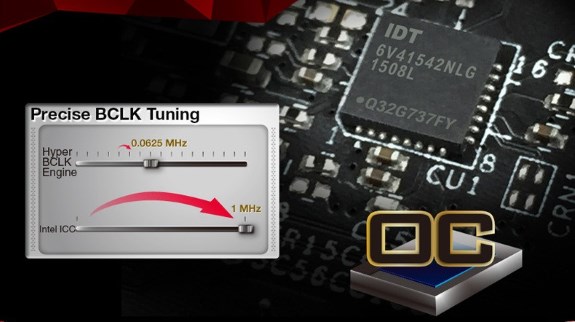