Posted on Friday, May 27 2016 @ 12:50 CEST by Thomas De Maesschalck
Biostar announces its celebrating its 30-year anniversary with the introduction of the Racing B150GT3 motherboard. This is a special edition with a custom Biostar 30 years logo in the heatsink.

30 Years Onwards, Racing to the Future
The BIOSTAR RACING B150GT3 showcases the best of BIOSTAR as part of their top-of-the-line RACING series. The board supports the latest 6th-generation Intel Core processors, the RACING B150GT3 gives gamers the latest technology powering their systems for the best experience when they play. Support for high-speed storage via M.2 and SATA Express enables high-speed access to data so games load faster so you can get to the action quicker. Gamers will also be able to show-off their personal style via VIVID LED DJ and 5050 LED FUN features which allows for customizable lighting for gamers who want a color-themed rig.

The BIOSTAR RACING B150GT3 supports dual-GPU configuration via AMD Crossfire for upgraders looking to get more FPS in their systems with another AMD Radeon GPU which supports AMD Crossfire technology. The motherboard has optimal spacing in-between the PCI-e X16 slots for maximum airflow so both cards operate at optimal conditions.

BIOSTAR has placed the legacy PS/2 ports in the RACING B150GT3 to allow players who prefer legacy peripherals to still use their devices on this motherboard.

Super 5 Design
Biostar has built the RACING series motherboard from the ground up, taking into consideration the ever-changing needs of gamers and enthusiasts. The new BIOSTAR RACING Series is proud to introduce the Super 5 Design Concept: 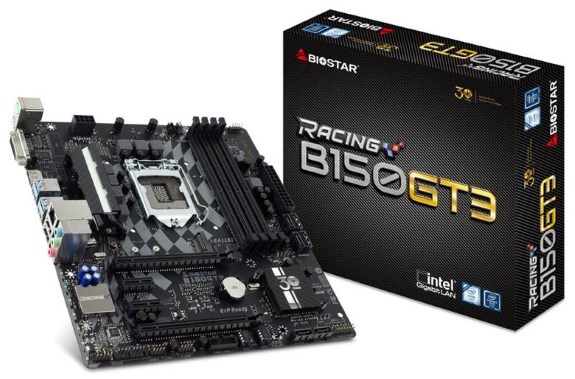