AMD moving HQ to Santa Clara, close to Intel's HQ than ever before

Earlier this year news broke that Irvine Company had bought AMD's headquarters from real estate investment trust W.P. Carey, with the intention of turning the site into apartments.

AMD sold its iconic Sunnyvale HQ to W.P. Carey in a sale-and-leaseback deal in 1995, but word on the street was that AMD was planning to downsize. The company was reportedly in the market to lease between 175,000 and 225,000 square feet of space elsewhere in Silicon Valley, a 30 to 45 reduction in footprint.

Now AMD announced it signed a long-term lease agreement to the newly-built Santa Clara Square Facility. Employee and equipment moves are expected to begin in Q3 2017 and should be completed by the end of 2017. AMD's lease to its current Sunnyvale HQ expires in December 2018.

The new HQ is located less than two miles south of AMD's current location, and is located a bit more than half a mile from Intel's Santa Clara HQ. 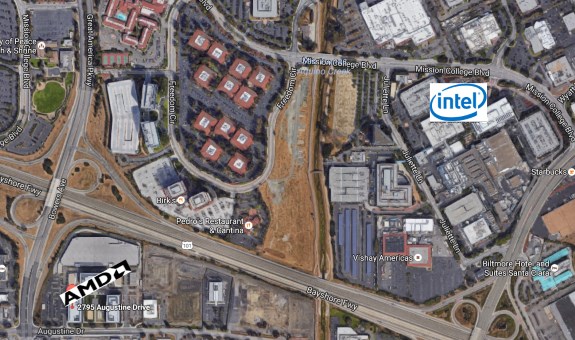 AMD (NASDAQ: AMD) today announced it has selected a state-of-the-art 220,000 square-foot building as the site of its new corporate headquarters and California research and development site. The soon to be completed six-story building will provide a modern, upgraded Silicon Valley office featuring contemporary finishes and state-of-the-art features and amenities for up to 1,000 local employees, capable of meeting current needs and accommodating future growth.

“Building on our 47 year legacy of technology innovation and leadership in Silicon Valley, our move to the Santa Clara Square complex will give us a modern and inspiring workspace to continue our leading-edge product development efforts,” said Ruth Cotter, Chief Human Relations Officer and Senior Vice President of Corporate Communications at AMD. “The prominent location and compelling work environment will help to foster new ideas in a collaborative environment while helping us to attract top talent in the region.”

AMD has entered into a long-term lease agreement for the new Santa Clara Square building, developed and operated by The Irvine Company. Located less than two miles south of AMD’s current location, the new headquarters will keep AMD close to key customers, partners, and public transportation options. Employee and equipment moves are expected to begin in Q3 2017 and be completed by the end of 2017.

AMD was founded in Sunnyvale more than 47 years ago, and the City of Sunnyvale will remain a prominent fixture in AMD’s rich history. In addition to the subset of the company’s workforce that reside in Sunnyvale, AMD will continue to support local charities and organizations based in the area. For example, during the company’s recent global AMD Cares Day of Service its Sunnyvale workforce contributed more than 160 volunteer hours in company-sponsored volunteer activities for the City of Sunnyvale World Monitoring Challenge, RAFT Sobrato Center, and Columbia Neighborhood Center, in addition to other organizations in the Bay Area.