Posted on Wednesday, Dec 07 2016 @ 15:46 CET by Thomas De Maesschalck
Western Digital announced the development of a HGST Ultrastar He12 HDD with a capacity of 12TB. This new helium-filled enterprise disk has eight platters with PMR technology and should start shipping in the first half of 2017. WD says the disk has the highest MTBF rating for an HDD at 2.5 million hours and claims it has the lowest power profile in the industryu.

A higher-capacity He12 disk with 14TB of storage capacity is expected by mid-2017, but that model will use the slower Shingled Magnetic Recording (SMR) technique.

On the solid state front, WD introduced the UltraStar SN200, a NVMe SSD with capacities from 800GB to 7.68TB that will ship in 2.5" and PCIe form factors. That model promises 'best-in-class 70/30 mixed read/write random performance of up to 560,000 4KiB IOPS'.

Both SSDs will be available in Q1 2017, more details can be found in the WD press release. 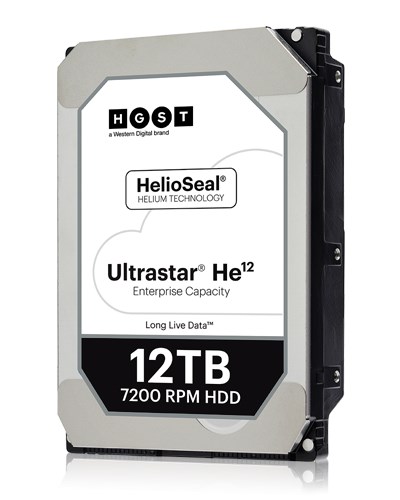