Intel 300 series chipsets to have integrated USB 3.1 and Gigabit WiFi

Asian tech site BenchLife published a chart that compares the feature set of the current Intel 200 series with the upcoming Intel 300 series. The latter will be launched later this year and will support the upcoming 14nm Coffee Lake and 10nm Cannon Lake processor architectures. Coffee Lake is expected in Q4 2017 and will be the first mainstream chip from Intel to offer six cores and twelve threads.

It seems the 200 series will be another incremental update, most of the basic feature set is similar to the 200 series but there are two big changes. First up, the 300 series will reportedly get integrated USB 3.1 Gen2 (10Gbps) support. This will enable motherboard makers to provide up to six USB 3.1 ports without having to use separate controller chips. The other change is that the 300 series will get native Gigabit 802.11ac WiFi (plus Bluetooth) support. As always, the exact feature set depends on the specific chipset and the motherboard implementation, what you see below is more like the maximum that's possible with the top-of-the-line Intel chipset. 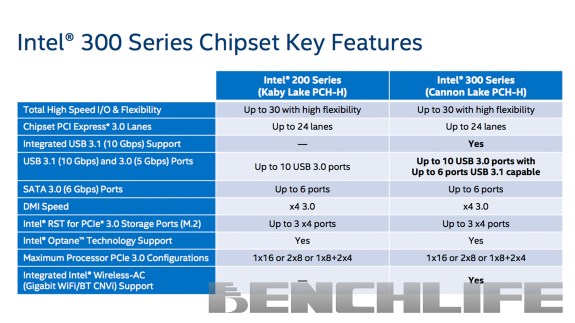