Python is now the most popular programming language

Posted on Tuesday, Jul 25 2017 @ 11:55 CEST by Thomas De Maesschalck
The 2017 programming language ranking by IEEE Spectrum found that Python is now world's top programming language. Python has seen tremendous growth over the last couple of years, last year it came in third in the IEEE Spectrum ranking but this year Python wins with an overall ranking of 100. It is closely followed by C with a ranking of 99.7 and Java with 99.4. The authors also point out that the best programming language varies depending on the use case, Python ranks best for web and desktop use, but doesn't do well for mobile or embedded applications.

Python has continued its upward trajectory from last year and jumped two places to the No. 1 slot, though the top four—Python, C, Java, and C++—all remain very close in popularity. Indeed, in Diakopoulos’s analysis of what the underlying metrics have to say about the languages currently in demand by recruiting companies, C comes out ahead of Python by a good margin. 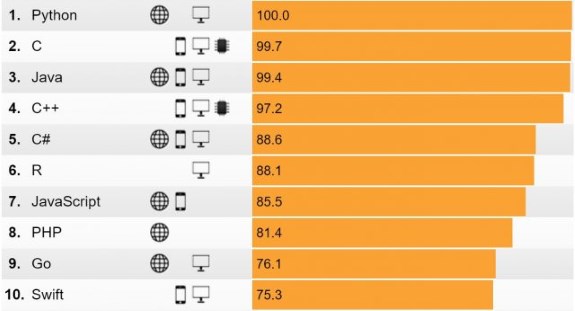