NVIDIA throws it out of the park, great gaming and datacenter growth in Q3

NVIDIA once again threw it out of the park! The company announced record third quarter revenue of $2.64 billion, up 32 percent year-over-year, and net income of $838 million, up 55 percent year-over-year. Revenue came in much higher than expected, Wall Street analyst consensus was $280 million lower than the number reported by NVIDIA. 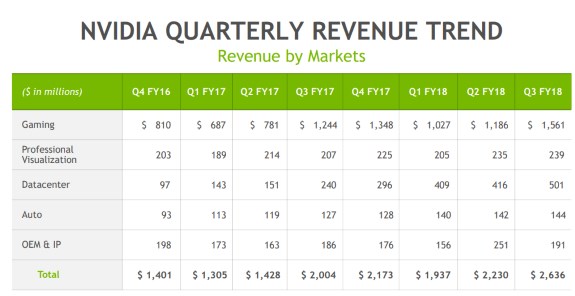 CEO Jen-Hsun Huang attributes the excellent quarter to great performance across all of NVIDIA's growth drivers. For the current quarter, NVIDIA expects revenue of $2.65 billion, plus or minus two percent. NVIDIA rewards shareholders with a 7 percent dividend increase.

The company's shares are currently slightly in the red in after-hours trading, perhaps because investors don't like the flat guidance. NVIDIA is priced as a high-growth stock so it needs more growth to keep the momentum going.

NVIDIA (NASDAQ:NVDA) today reported record revenue for the third quarter ended October 29, 2017, of $2.64 billion, up 32 percent from $2.00 billion a year earlier, and up 18 percent from $2.23 billion in the previous quarter, with growth across all its platforms.

“We had a great quarter across all of our growth drivers,” said Jensen Huang, founder and chief executive officer of NVIDIA. “Industries across the world are accelerating their adoption of AI.

“Our Volta GPU has been embraced by every major internet and cloud service provider and computer maker. Our new TensorRT inference acceleration platform opens us to growth in hyperscale datacenters. GeForce and Nintendo Switch are tapped into the strongest growth dynamics of gaming. And our new DRIVE PX Pegasus for robotaxis has been adopted by companies around the world. We are well positioned for continued growth,” he said.