Posted on Friday, Nov 17 2017 @ 12:29 CET by Thomas De Maesschalck
So many month after the launch of Vega, we still haven't seen any custom AIB versions of this new architecture from AMD. Nobody is in a rush to get custom Vega cards to the market, but at least there's a tweet or a leak every once in a while to remind us that these cards are still under development.

Today VideoCardz got its hands on two photos of the PowerColor Radeon RX Vega 64 Red Devil. This model takes up 2.5-slots and has a triple-fan cooler, some slight changes were made to the PCB but overall it looks similar to the reference card:

The card has two DIP switches. The first one is a triple-BIOS switch, yes, there are three BIOSes (and no I don’t know why yet). The other one is to control the LED lighting for Red Devil logo.

The PCB hasn’t really changed that much compared to reference design. The same number of V-Core phases is used, but the board is wider to accommodate the new cooler. The Red Devil also has two DisplayPorts and two HDMI connectors (unlike reference design which has three DPs).

Current word on the street is that PowerColor wants to get the Radeon RX Vega 64 Red Devil on retail shelves by early December. A Radeon RX Vega 56 variant should follow at a later date. 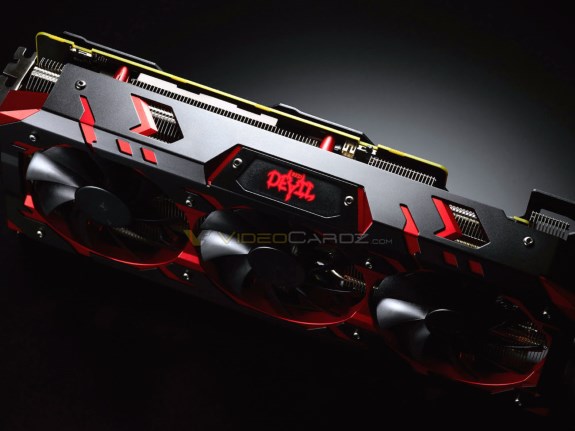