Posted on Wednesday, Mar 28 2018 @ 13:32 CEST by Thomas De Maesschalck
At its GPU Technology Conference, NVIDIA showcased its upcoming DGX-2. This is quite a beast, it's a $399,000 deep learning beast with a whopping 16 Tesla V100 GPUs with 32GB HBM2 each. The Volta-based GPUs are linked using the new NVIDIA NVSwitch, which enables 16 Tesla V100 cards to simultaneously communicate at a bandwidth of 2.4TB/s. The DGX-2 system has a power draw of up to 10kW and delivers deep learning performance of up to 2 petaflops! 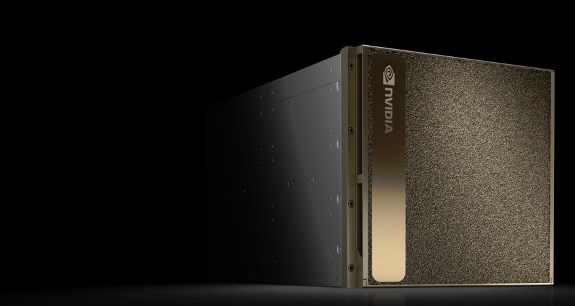 NVIDIA today unveiled a series of important advances to its world-leading deep learning computing platform, which delivers a 10x performance boost on deep learning workloads compared with the previous generation six months ago.

Key advancements to the NVIDIA platform — which has been adopted by every major cloud-services provider and server maker — include a 2x memory boost to NVIDIA® Tesla® V100, the most powerful datacenter GPU, and a revolutionary new GPU interconnect fabric called NVIDIA NVSwitch™, which enables up to 16 Tesla V100 GPUs to simultaneously communicate at a record speed of 2.4 terabytes per second. NVIDIA also introduced an updated, fully optimized software stack.

“The extraordinary advances of deep learning only hint at what is still to come,” said Jensen Huang, NVIDIA founder and CEO, as he unveiled the news at GTC 2018. “Many of these advances stand on NVIDIA’s deep learning platform, which has quickly become the world’s standard. We are dramatically enhancing our platform’s performance at a pace far exceeding Moore’s law, enabling breakthroughs that will help revolutionize healthcare, transportation, science exploration and countless other areas.”

Tesla V100 Gets Double the Memory
The Tesla V100 GPU, widely adopted by the world’s leading researchers, has received a 2x memory boost to handle the most memory-intensive deep learning and high performance computing workloads.

Now equipped with 32GB of memory, Tesla V100 GPUs will help data scientists train deeper and larger deep learning models that are more accurate than ever. They can also improve the performance of memory-constrained HPC applications by up to 50 percent compared with the previous 16GB version.

NVSwitch: A Revolutionary Interconnect Fabric
NVSwitch offers 5x higher bandwidth than the best PCIe switch, allowing developers to build systems with more GPUs hyperconnected to each other. It will help developers break through previous system limitations and run much larger datasets. It also opens the door to larger, more complex workloads, including modeling parallel training of neural networks.

NVSwitch extends the innovations made available through NVIDIA NVLink™, the first high-speed interconnect technology developed by NVIDIA. NVSwitch allows system designers to build even more advanced systems that can flexibly connect any topology of NVLink-based GPUs.

DGX-2 is the first system to debut NVSwitch, which enables all 16 GPUs in the system to share a unified memory space. Developers now have the deep learning training power to tackle the largest datasets and most complex deep learning models.

DGX-2 can train FAIRSeq, a state-of-the-art neural machine translation model, in less than two days — a 10x improvement in performance from the DGX-1 with Volta, introduced in September.

Industry Support for Tesla V100 32GB
“Our collaboration with NVIDIA on AI technologies includes recent breakthroughs in Chinese-to-English translation,” said Xuedong Huang, technical fellow and head of speech and language at Microsoft. “With the new Tesla V100 32GB GPUs, we will be able to train larger, more complex AI models faster. This will help extend the accuracy of our models on speech recognition and machine translation reaching human capabilities and enhancing offerings such as Cortana, Bing and Microsoft Translator.”

DGX-2, with 16 GPUs, is the top of the lineup. It joins the NVIDIA DGX-1 system, which features eight Tesla V100 GPUs, and DGX Station™, the world’s first personal deep learning supercomputer, with four Tesla V100 GPUs in a compact, deskside design. These systems enable data scientists to scale their work from the complex experiments they run at their desks to the largest deep learning problems, allowing them to do their life’s work.