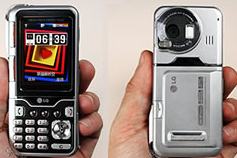 Here some information about the upcoming C960 phone from LG which will feature a five megapixel camera and also a MP3 player feature!

Again the C960 carries a 5 megapixel camera (what do you expect? it is meant for the eastern markets!). Now unlike the usual method of placing the camera lens behind the display, the C960 places the camera behind the keypad. This is done since the upper and lower halves are not equal in size. If you look at the pictures carefully, notice that the upper halve with the display is much larger. The lens and display are thus on different halves, its better to shoot photos and videos this way, with the phone rotated into two halves. The 5 megapixel camera is also supported with a flash.

Find out more about this phone over at PhoneyWorld