Posted on Wednesday, Dec 19 2018 @ 17:34 CET by Thomas De Maesschalck
Scientists from MIT and the University of Colorado created world's first 3D transistor with a width of just 3nm. In order to be able to create this transistors, the researchers developed a new microfabrication technique that modified semiconductor material atom by atom. Intel commented on the work by saying that it opens up possibilities for further scaling of transistors.

Researchers from MIT and the University of Colorado have fabricated a 3-D transistor that’s less than half the size of today’s smallest commercial models. To do so, they developed a novel microfabrication technique that modifies semiconductor material atom by atom.

The inspiration behind the work was to keep up with Moore’s Law, an observation made in the 1960s that the number of transistors on an integrated circuit doubles about every two years. To adhere to this “golden rule” of electronics, researchers are constantly finding ways to cram as many transistors as possible onto microchips. The newest trend is 3-D transistors that stand vertically, like fins, and measure about 7 nanometers across — tens of thousands of times thinner than a human hair. Tens of billions of these transistors can fit on a single microchip, which is about the size of a fingernail.

As described in a paper presented at this week’s IEEE International Electron Devices Meeting, the researchers modified a recently invented chemical-etching technique, called thermal atomic level etching (thermal ALE), to enable precision modification of semiconductor materials at the atomic level. Using that technique, the researchers fabricated 3-D transistors that are as narrow as 2.5 nanometers and more efficient than their commercial counterparts.

Similar atomic-level etching methods exist today, but the new technique is more precise and yields higher-quality transistors. Moreover, it repurposes a common microfabrication tool used for depositing atomic layers on materials, meaning it could be rapidly integrated. This could enable computer chips with far more transistors and greater performance, the researchers say.

“We believe that this work will have great real-world impact,” says first author Wenjie Lu, a graduate student in MIT’s Microsystems Technology Laboratories (MTL). “As Moore’s Law continues to scale down transistor sizes, it is harder to manufacture such nanoscale devices. To engineer smaller transistors, we need to be able to manipulate the materials with atomic-level precision.”

Joining Lu on the paper are: Jesus A. del Alamo, a professor of electrical engineering and computer science and an MTL researcher who leads the Xtreme Transistors Group; recent MIT graduate Lisa Kong ’18; MIT postdoc Alon Vardi; and Jessica Murdzek, Jonas Gertsch, and Professor Steven George of the University of Colorado.

Atom by atom
Microfabrication involves deposition (growing film on a substrate) and etching (engraving patterns on the surface). To form transistors, the substrate surface gets exposed to light through photomasks with the shape and structure of the transistor. All material exposed to light can be etched away with chemicals, while material hidden behind the photomask remains.

The state-of-the-art techniques for microfabrication are known as atomic layer deposition (ALD) and atomic layer etching (ALE). In ALD, two chemicals are deposited onto the substrate surface and react with one another in a vacuum reactor to form a film of desired thickness, one atomic layer at a time.

Traditional ALE techniques use plasma with highly energetic ions that strip away individual atoms on the material’s surface. But these cause surface damage. These methods also expose material to air, where oxidization causes additional defects that hinder performance.

In 2016, the University of Colorado team invented thermal ALE, a technique that closely resembles ALD and relies on a chemical reaction called “ligand exchange.” In this process, an ion in one compound called a ligand — which binds to metal atoms — gets replaced by a ligand in a different compound. When the chemicals are purged away, the reaction causes the replacement ligands to strip away individual atoms from the surface. Still in its infancy, thermal ALE has, so far, only been used to etch oxides.

The researchers exposed the material to hydrogen fluoride, the compound used for the original thermal ALE work, which forms an atomic layer of metal fluoride on the surface. Then, they poured in an organic compound called dimethylaluminum chloride (DMAC). The ligand-exchange process occurs on the metal fluoride layer. When the DMAC is purged, individual atoms follow.

The technique is repeated over hundreds of cycles. In a separate reactor, the researchers then deposited the “gate,” the metallic element that controls the transistors to switch on or off.

In experiments, the researchers removed just .02 nanometers from the material’s surface at a time. “You’re kind of peeling an onion, layer by layer,” Lu says. “In each cycle, we can etch away just 2 percent of a nanometer of a material. That gives us super high accuracy and careful control of the process.”

Because the technique is so similar to ALD, “you can integrate this thermal ALE into the same reactor where you work on deposition,” del Alamo says. It just requires a “small redesign of the deposition tool to handle new gases to do deposition immediately after etching. … That’s very attractive to industry.”

Thinner, better “fins”
Using the technique, the researchers fabricated FinFETs, 3-D transistors used in many of today’s commercial electronic devices. FinFETs consist of a thin “fin” of silicon, standing vertically on a substrate. The gate is essentially wrapped around the fin. Because of their vertical shape, anywhere from 7 billion to 30 billion FinFETs can squeeze onto a chip. As of this year, Apple, Qualcomm, and other tech companies started using 7-nanometer FinFETs.

Most of the researchers’ FinFETs measured under 5 nanometers in width — a desired threshold across industry — and roughly 220 nanometers in height. Moreover, the technique limits the material’s exposure to oxygen-caused defects that render the transistors less efficient.

The device performed about 60 percent better than traditional FinFETs in “transconductance,” the researchers report. Transistors convert a small voltage input into a current delivered by the gate that switches the transistor on or off to process the 1s (on) and 0s (off) that drive computation. Transconductance measures how much energy it takes to convert that voltage.

Limiting defects also leads to a higher on-off contrast, the researchers say. Ideally, you want high current flowing when the transistors are on, to handle heavy computation, and nearly no current flowing when they’re off, to save energy. “That contrast is essential in making efficient logic switches and very efficient microprocessors,” del Alamo says. “So far, we have the best ratio [among FinFETs].”

“Thanks to the novel etch technique, this demonstration opens up possibilities for further scaling of transistors with high performance," says Uygar Avci, leader of the Advanced Device Research Group at Intel. "The work deserves additional praise because of exceptional collaboration of two groups in separate universities with different know-hows: University of Colorado with its material processing innovation and MIT with its transistor design expertise.” 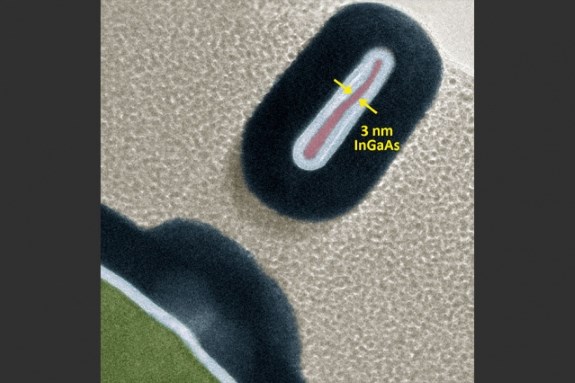