Posted on Tuesday, January 19 2021 @ 16:18 CET by Thomas De Maesschalck
These days the focus is all on M.2 solid state disks but if you have an older workhorse in need of an upgrade you may still be interested in a new 2.5" SATA disk. Samsung just introduced the 870 EVO SSD, a new line of SATA disks with a new Samsung MKX controller and 136-layer TLC NAND flash memory.

Basically, if you need a SATA disk, this is one of the fastest options on the market right now.

Today, Samsung Electronics America announced the release of the 870 EVO SSD, the company’s latest SATA solution in its best-selling consumer SSD series. The new drive combines best-in-class performance and reliability, making it an ideal storage solution for a wide range of consumers from general PC users to IT professionals in capacities up to four terabytes.


Harnessing its experience and expertise in storage technologies, Samsung designs all SSD components in-house to ensure that every part works together cohesively. As a result, the 870 EVO offers around a 30% improvement in sustained performance over the 860 EVO, as well as a class-leading terabytes written (TBW) rating of 2,400TB, or a 5-year limited warranty, for its 4TB model.

In addition to exceptional performance and reliability, the 870 EVO provides broad compatibility with many computing devices thanks to its 2.5-inch SATA interface. Moreover, with its power-saving sleep mode, the 870 EVO is compatible with devices that support Window’s Modern Standby function, offering added convenience to PC users.

The new 870 EVO is also designed with the environment in mind. By minimizing its carbon footprint throughout the entire production process, the drive expands consumer choice for greener products. 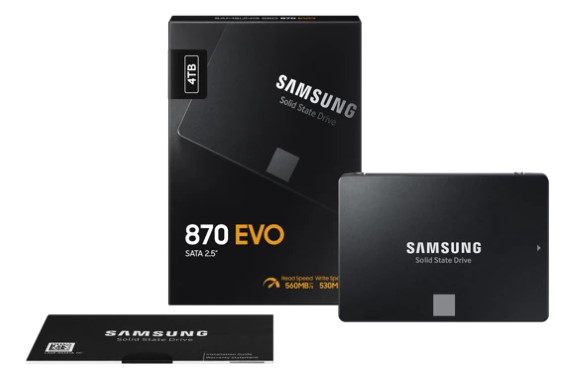