Generally, we don't talk about server hardware on DVHARDWARE but every once in a while there's news worth covering as what happens on the server front has implications for future consumer hardware, or offers clues about future desktop models.

Today there's a fresh leak about Genoa, the upcoming 5nm Zen 4-based EPYC server series from AMD. As expected, AMD's upcoming generation will offer a big increase in core count. The current 7nm Zen 2-based "Rome" and the soon-to-be-out 7nm Zen 3-based "Milan" lines max out at 64 cores and have 128 threads. The full configuration of the Genoa generation on the other hand will offer 50 percent more cores -- resulting in a massive 96 cores and 192 threads.

Besides more cores, there will be a big update in terms of memory and I/O. Genoa is expected to feature a 12-channel memory controller with support for DDR5-200. For comparison, Rome and Milan support eight-channel DDR4-3200. The future generation will also support 128 PCI Express 5.0 lanes.

The source of this leak is ExecutableFix, a Twitter user known for reliable CPU news leaks. The EPYC "Genoa" processors are expected sometime in 2022. They will compete with Intel's Xeon "Sapphire Rapids".

More chiplets -- and not more cores per chiplet

Interestingly, ExecutableFix claims Genoa features a central I/O chiplet and up to 12 chiplets, each with 8 cores. This means AMD isn't increasing the number of cores per chiplet, but the number of chiplets. With a package size of 720 x 754mm, Genoa is a pretty massive chip. 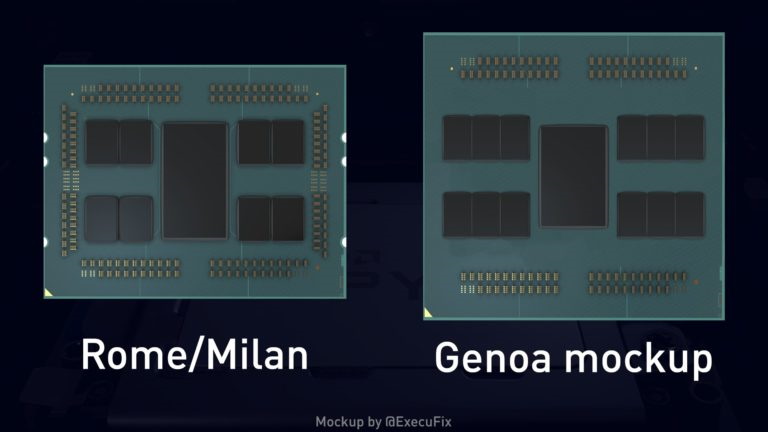 What it means for Zen 4-based desktop CPUs

The implications for Zen 4-based desktop processors are hard to estimate, at the moment there are no leaks about possible core counts. AMD is unlikely to stick to a maximum of two chiplets for Zen 4-based consumer processors so things will depend on whether AMD decides to go for three or four chiplets. This would result in 5nm desktop CPUs with 24 or possibly up to 32 cores.

Next, there's a rumor that Zen 4 will support the AVX3-512 as well as the and BFLOAT16 instruction sets. Both are used frequently in deep learning workflows. At the moment, AVX-512 support is one of the advantages Intel has over AMD.