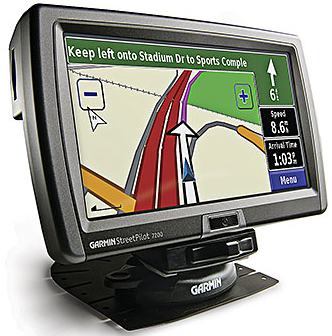 "The 7000-series was designed for larger vehicles -- such as RVs, conversion vans, semi-trucks, and buses -- because of its seven-inch screen, automotive and entertainment features, and portability," said Gary Kelley, Garmin's vice president, marketing. "When designing this new StreetPilot family, we considered possible events that could impede a driver's progress and then created ways to avoid those delays. By seeing traffic and weather delays in advance, a driver can save time by following a route around the delay."

The StreetPilot 7200 and 7500 offer optional traffic management systems that make driving with GPS essential, even if the driver is familiar with the route. The unit notifies the driver of accidents, road construction, and weather-related traffic delays before they are encountered, and then offers an alternative route to avoid the traffic or road hazard. In the United States, traffic data is supplied by XM NavTraffic or Clear Channel's RDS-TMC Total Traffic Network. In Europe, the RDS-TMC traffic is supplied by various providers depending upon the country. XM NavTraffic is aggregated by NAVTEQ Traffic and is the first satellite-based data traffic information service that enables an overlay of current traffic conditions in select markets across the U.S.

Drivers will also have several entertainment options to choose from as they drive -- an internal MP3 player, XM radio, or audio books. The built-in MP3 player lets users browse music by artist, album, song, or genre. Music can be loaded onto an SD card and is "drag-and-drop" easy -- no special software is required. The optional XM Radio features 150-plus channels of commercial free music, sports, news, talk, entertainment, and stock programming. The StreetPilot 7200 and 7500 are also compatible with http://www.audible.com , a subscription based audio book service. All music or speech files can be emitted over the vehicle's existing speakers, through the StreetPilot's built-in FM wireless transmitter or via the unit's 3.5mm stereo output jack. The entertainment audio is muted when navigation instructions are given.

The StreetPilot 7200 and 7500 can also display a video signal from an external analog source, such as a back-up camera. When an external video source is active, the user may revert to the map display by touching anywhere on the screen. This feature is currently only available in the United States. The StreetPilot 7500 also offers a dead-reckoning feature that allows drivers to continue receiving navigational cues when GPS signals are obscured -- such as tunnels -- through a built-in solid state gyro and a connection to a vehicle's odometer system. Minimal installation is required for the dead-reckoning feature.

With its seven-inch touchscreen interface, the StreetPilot 7200 and 7500 are designed to offer intuitive navigation capability with automatic route calculation; voice-prompted, turn-by-turn directions; and automatic rerouting if a motorist strays off course. The unit speaks street names, so users will know to "turn right on Main Street." Garmin has also made it possible for customers to augment the pre-loaded maps with Custom POIs such as school zones and safety cameras.

The face of the StreetPilot 7200 and 7500 only has one button -- an on/off switch. The side and back of the unit houses integrated internal speaker, mini USB port, AV input, SD card slot and 3.5 mm stereo output jack. A wireless infrared alphanumeric remote control that allows easy operation of the device from a distance is standard equipment.

The optional traffic, weather, and audio data is delivered to the StreetPilot 7200 and 7500 through the GTM 10, GTM 11 or GXM 30 antenna. The GTM 10 and GTM 11 are FM RDS-TMC traffic receivers that receive digital information (where available) on traffic, road construction, and weather related tie-ups. The GTM 10 requires installation, and Garmin recommends that customers visit an aftermarket automotive electronics dealer to install the GTM 10. The newly announced GTM 11 is a portable FM RDS-TMC receiver that does not require installation. The GXM 30 delivers the XM Satellite Radio, NavTraffic and Weather services. Roughly three inches in diameter, the GXM 30 processes all XM information and sends the finished data to the unit for display.