Intro
With the launch of the new 800MHz FSB Pentium 4 CPU's Intel also announced two new chipsets, the Canterwood for high-performance systems, and the Springdale chipset which is a little bit cheaper. The only big difference between both is that the Canterwood chipset supports ECC (Error Correcting) Memory and officially supports Intels PAT (Performance Acceleration Technology). But more about that later because some motherboard makers have enabled the PAT on their Springdale motherboards. Probably the Canterwoods have passed some sort of quality test, I guess that is the real difference between these two chipsets. The motherboard we have on our test bench for this review is a Springdale one from AOpen, the AOpen AX4SG Max. 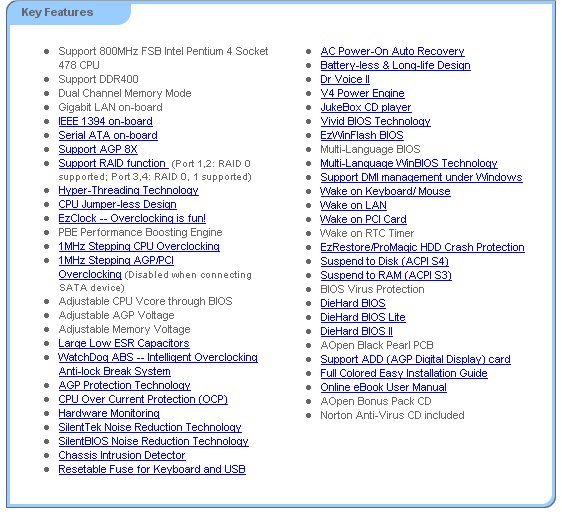 What is Serial ATA (SATA)?
SATA is a new standard that will replace the parallel ATA within a few years. SATA offers more bandwidth (150MB/s), and will even become faster in the future (Up to 600MB/s is planned). Also nice about it are the thin cables which still allow a lot of airflow in your case. This motherboard supports 4 SATA devices, two are controlled by the Intel ICH5R southbridge chipset, and the two other ones are controlled by the Silicon Image SATA controller.

Comment #1 posted by LSDsmurf on 2003-08-26 12:58:23
BIOS updates are avaible at http://download.aopen.com.tw/downloads/default.asp?Software=All&searchoption=keyword&sel=category&selpage=&seltype=BIOS&keyword=AX4SG%20Max&Language=English