Mounting tools
The heatsink comes with a small box which includes all the mounting hardware and a short manual. 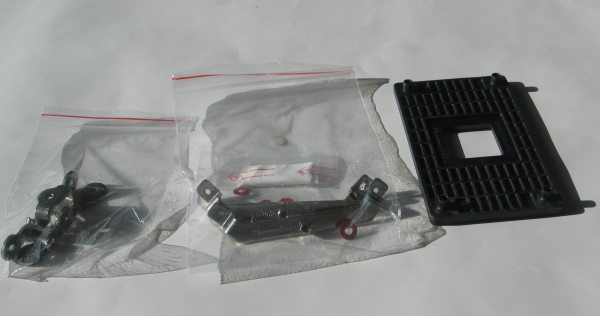 Installation
The BlueOrb FX is a pretty massive cooler, this may cause some installation problems on some motherboards but on the Asus Commando it went pretty smooth. The installation does take some time, mainly because you first need to remove your motherboard, but it's pretty easy: 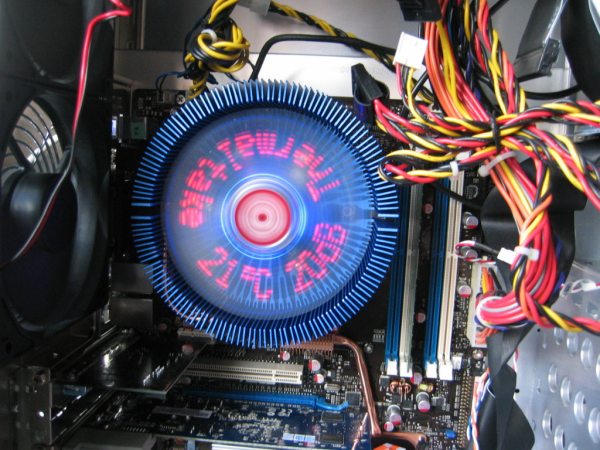 Testing
To test the performance of this cooler I ran tests on my E6400 based test system in idle and load modes. I first tested on stock clockspeed and also did some overclocking. The temperatures of the processor were read by a program from Intel called Thermal Analysis Tool (TAT) while the motherboard temperature was read out by the Asus PC Probe tool. For each set of temperature results, I also provide the ambient temperature of the room in which I performed these tests.

To get idle temperatures I just booted the system into Windows XP and let it rest for about 15mins. To get load temperatures I ran the Prime95 torture test while simulating a workload level of 100% for both cores in the Intel Temperature Analysis Tool. For the overclocking test I boosted the FSB of my E6400 from 266MHz to 333MHz, bringing it close to the clockspeed of the 2.67GHz Core 2 Duo E6700.

Temperatures:
The first set of temperatures results are from running the E6400 at its stock clockspeed. All temperatures are in degrees Celsius. 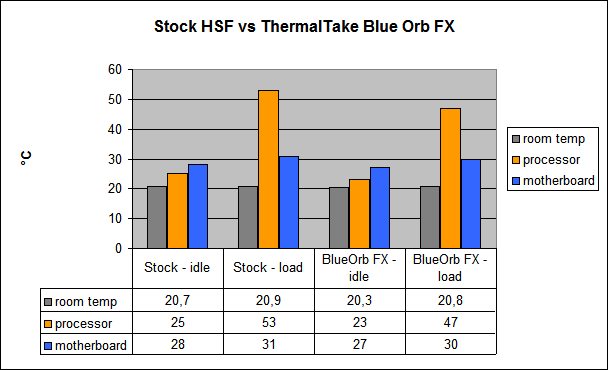 Under idle conditions, both coolers perform really well and the BlueOrb FX manages to outperform the stock cooler by 2°C, additionally, thanks to the extra airflow it also managed to get the temperature of the motherboard 1°C lower. Under heavy load the BlueOrb FX scored 6°C better than the stock HSF, and it also managed to lower the temperature of the motherboard by 1°C in this case.

A bit later I took the same temperature readings, but with the processor overclocked to 2663MHz. 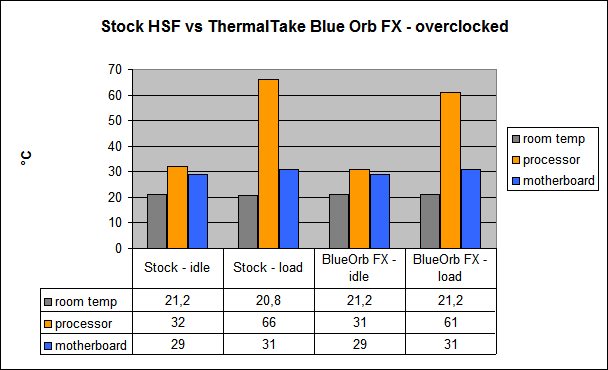 In this scenario the stock HSF has trouble cooling the processor, reaching a max temperature of 66°C under heavy load. The ThermalTake Blue Orb FX reached a maximum temperature of 61°C, it's 5°C better than the stock cooler but not really impressive. I suppose they could improve the cooling performance of this cooler by using a copper base but I believe it's pretty clear from these results that this cooler isn't a good choice for overclockers. However, we should take in mind of course that the stress test really stressed the processor to the max, by running Prime95's torture test alone on the overclocked processor I barely got above 48°C.

Noise:
One of the first things I noticed when I booted my system was the noise level of the BlueOrb FX. It's not as noiseless as the specifications want you to believe. It's not extremely loud but it's definitely a bit louder than the stock Intel Core 2 Duo E6400 HSF. 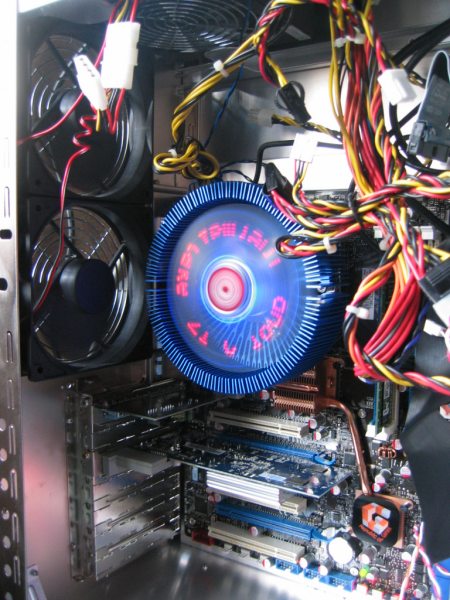 Conclusion:
I have mixed feelings about the ThermalTake Blue Orb FX - the looks are superb and the lightshow impressed me but unfortunately the cooling performance is only mediocre, there's still room for improvement. At stock clockspeeds this HSF still performs quite decent but when you start overclocking load temperatures rise too high. Additionally, there's also the problem that the fan isn't really that silent. The heatsink is huge and I expected it would at least be a bit more silent than the stock cooler but it wasn't.

If you're a heavy overclocker I don't recommend this fan, but if you're just looking for a cool processor cooler to improve the looks and WOW-factor of your casemod you could consider the BlueOrb FX.


The Good Stuff:
- Nice lightshow
- Cools a lot better than the stock Intel cooler
- Has a nice looking design
- It doesn't only cool your processor but also your motherboard, although not as much


The Bad Stuff:
- Not really quiet
- Not for heavy overclockers
- User can't control which message the fan should display
- Temperatures only in Celsius, no Fahrenheit for U.S. consumers
- Noise level is just theoretical, the HSF doesn't have a decibelmeter.