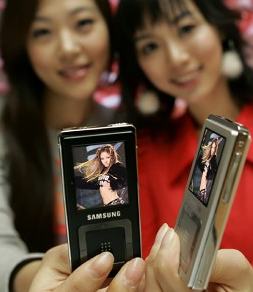 For its new YP-Z5 digital audio player Samsung hired Paul Mercer. This decision is significant because Apple, in designing the original iPod in 2001, turned to Mercer's company for the software.

The result of that partnership is Samsung's newest Z5 portable MP3 player, which will appear on store shelves March 5. The software inside the player was forged at Iventor Inc. by a small team of programmers led by Paul Mercer, 38, a veteran Apple Macintosh software designer.

Samsung's decision to hire Mr. Mercer is significant because Apple, in designing the original iPod four years ago, turned to Pixo Inc., the company Mr. Mercer founded after he left Apple in 1994 to create software for hand-held devices.

The Samsung Z5 will have a 1.8-inch display and a battery life of 35 hours. It will compete with Apple's iPod nano and will be priced at $199 to $249, depending on the storage capacity. More details over at NY Times.