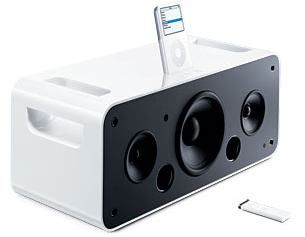 Andrew Thomas from The Inquirer is a lot older than me but he thinks roughly the same as me about Apple's new iPod Hi-Fi:

What finer example of the Apple marketing machine's power over the gullible could there be than the launch of the "HiFi" ghetto blaster add on for the iPod? After years of flogging overpriced products on the grounds that they were technically superior, Apple now launches an overpriced product so demonstrably inferior to a genuine HiFi system that it would be laughable were it not for the power of the Apple Marketing Juggernaut.

Make no mistake, the same gullible saps who think an iPod is cool will rush out and snap up these useless things and push up the level of credit card debt around the world to new heights. Because the battery-powered cereal packet with a couple of tiny speakers in it carries an Apple logo, they'll fondly imagine it sounds great, but as they'll only be listening to James Blunt and Coldplay anyway, who cares?

You can read the rest over here.