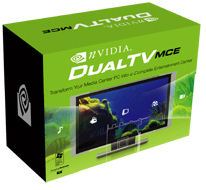 The NVIDIA DualTV tuner is available immediately for $169 USD.

With its unique two-tuner technology, the NVIDIA DualTV tuner transforms an MCE-equipped PC into a bona fide home entertainment system. With a touch of a mouse button, users can schedule recordings of their favorite TV shows and watch them when they want, record two TV shows simultaneously, or watch one channel while recording another, as well as watch pause, and rewind live or recorded TV shows.

With the emergence of portable media players and ubiquitous broadband availability, NVIDIA DualTV users can watch their programs from almost anywhere—in the home, on the go, or over the Internet. Programs recorded with the NVIDIA DualTV tuner can be transferred to personal media players and portable game players that play back video, and many other portable media players. Live or recorded shows can be streamed throughout the home to game consoles or Media Center Extenders; and with Orb Networks software (www.orb.com), NVIDIA DualTV tuner users can watch live or recorded TV shows from anywhere in the world over the Internet for personal use.

NVIDIA has applied its renowned PureVideo technology to the DualTV tuner enabling the highest possible picture quality on a PC to date. In addition to PureVideo, the NVIDIA DualTV tuner features: In addition to these picture-quality enhancing features, the NVIDIA DualTV tuner carries the Imaging Science Foundation (ISF) certification, signifying that it meets ISF standards for home theater-quality television tuning and recording. Since 1994, ISF has provided comprehensive testing and certification of performance quality, and a publicly recognized logo program for high-end consumer electronics products that consumers identify with superior quality.