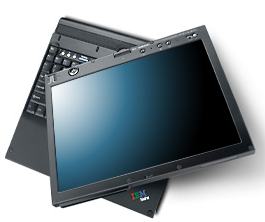 Lenovo today announced the ThinkPad X60 Tablet, a new convertible tablet PC marking a technology trifecta for innovation, portability and performance -- with two new screen choices and other innovative Lenovo features, such as dynamic screen rotation. The ThinkPad X60 Tablet offers new, combined MultiView/MultiTouch screen features in a convertible tablet PC, giving users the power to compute more naturally, whether working in the field or in the office.

The MultiView/MultiTouch screen combination along with the ThinkPad X60 Tablet’s standard 170 degree viewing angle provides excellent usability for the healthcare professional recording patient information in a hospital, the real estate agent taking notes in a home or the sports coach reviewing statistics at a game. The ThinkPad X60 Tablet also gives users sharp, crisp images with more vibrant color when they choose to add a new, high-resolution SXGA+ screen.

According to IDC1, convertible tablet PC unit shipments will reach more than one million this year and more than four million by 2010. With more industries relying on tablet PCs, Lenovo tablet customers have included mobile professionals in fields such as healthcare, insurance, real estate, government, education and sales.

“A recent campus-wide survey revealed that over 90 percent of the student body believes that computer technology enhances his or her learning experience,” said Philip Lombardi, director of academic computing and media services at Bryant University. “Of the students surveyed, we discovered that more students would prefer to use a tablet over a traditional notebook PC because of its light weight and ease of use in taking notes. In the past year, a group of first year psychology majors have been using Lenovo Tablet PCs to administer surveys and collect data as part of a pilot program. Our goal is to extend this technology to more students in various majors to provide them with a PC solution that best complements their academic experience.”

The ThinkPad X60 Tablets come equipped with Lenovo’s patent-pending Active Rotate function. With Active Rotate, the screen immediately orients to the user, no matter which direction it turns. The ThinkPad X60 Tablet’s design also focuses on improving more traditional tablet features like navigational tools and the pen. Now a redesigned navigational dial lets users move easily in four directions, and it even remaps keys so “up” is always “up” as the user changes orientation with Active Rotate. Also, a new, more natural and durable pen resumes from suspend mode automatically when a user removes it from its cradle. An enhanced digital microphone repositioned on the front bezel enables accurate voice recognition and rounds out the ThinkPad X60 Tablet’s sensory improvements.