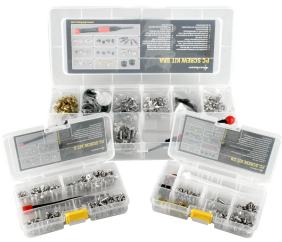 For PC Hobbyists who have more than once discovered when assembling or modifying a machine that some small part -- a screw, cable tie, jumper, or mainboard spacer for example -- always seems to be missing, Sharkoon now has a remedy. The new Screw Kits from Sharkoon are designed as three practical "first-aid kits" containing often-needed pieces and implements ready to use and clearly organized in separate compartments. The PC Screw Kits are available in three versions, each with a different collection of parts for different needs.

The Sharkoon PC Screw Kit CR (Cable management and Rubber parts) offers a more extensive selection of accessories: in addition to the same collection of screws as in the basic set, the CR kit also contains round-headed mounting screws with 6mm coarse threading for hard drives and add-on cards, cable ties, jumpers (2.54 mm), as well as paperboard washers and metal spacers for mounting mainboards. The Sharkoon Screw Kit CR does not include a screwdriver.