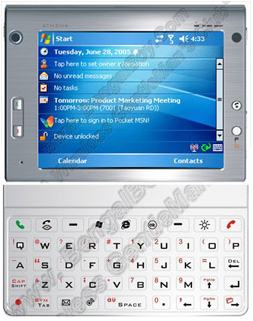 Gizmodo has some info and a photo of HTC's Athena smartphone which looks a bit like a UMPC:

Featuring a removable QWERTY keyboard, the Athena has a 3.5-inch touchscreen QVGA display (they should have went VGA for a screen this size), 256MB ROM, 64MB RAM, 400MHz Samsung processor, Bluetooth, 802.11b/g, 2-megapixel camera, USB 1.1 and a SD expansion slot.

Just like the HTC TyTN, the phone has a video camera on the front for video calls, plus a bunch of other call keys as well. it's hard to fit a phone with a 3.5-inch screen into most pockets, so you'll probably be carrying this one in a bag instead.