Dolphin boat leaps out of the water like a dolphin 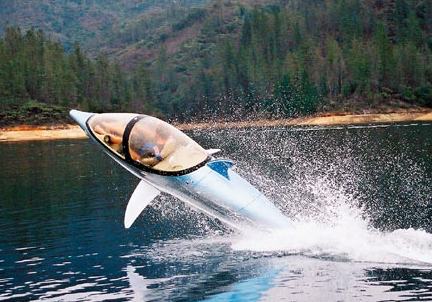 Two water sport fanatics created an amazing boat that's shaped like a dolphin. The boat is called Seabreacher and it can jump 10 feet in the air and even perform acrobatic tricks.

Two persons can sit in the Seabreacher and the boat can submerge 2 ft underwater for around 20 seconds at a time, creating a dolphin-like dive effect.

The price for a custom-made Seabreacher is not for the fainthearted and would cost in the region of £40,000.

Mr Innes said: "Because it's so light it pops out of the water like a cork. It can fly up to 10 feet in the air even if you are going at 15 mph.

"It's really just for fun. It's a 3-D jet ski. We liken it to a monster truck. In the end we would like to turn it into a recognised sport as you can race and jump. You can do a single or double roll in the Seabreacher which is great fun though the landing is quite rough.