Posted on Thursday, Jan 04 2007 @ 13:44 CET by Thomas De Maesschalck
Samsung announced today that it has created the first LCD panel that can produce independent images on each side of a mobile LCD display. Samsung's new double-sided LCD can show two entirely different pictures or sets of visual data simultaneously on the front and back of the same screen. Other conventional double-sided LCDs can only show a reverse image of the same video data.

This new development will replace two display panels with one, thereby reducing overall thickness of mobile products by at least 1mm.

Executive Vice President Yun Jin-hyuk, in charge of the Mobile Display Division of the Samsung Electronics LCD Business, says, "Our new double-sided mobile display underscores Samsung's commitment to equip our customers with advanced display technology that accelerates the trend toward slimmer mobile products. We anticipate high demand when we commence mass production in the first half of 2007." 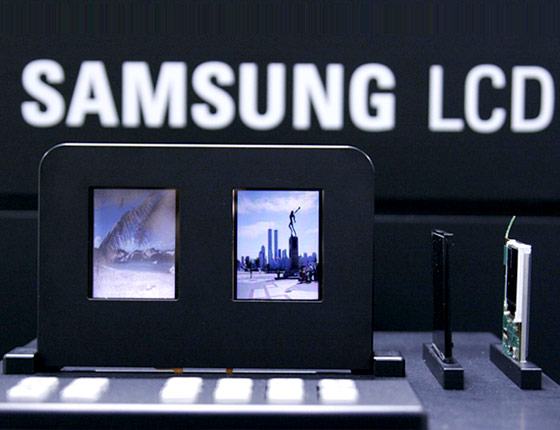 The breakthrough LCD product makes use of Samsung's new double-gate, thin-film transistor (TFT) architecture. TFT gates are electronic components that convert the necessary voltage at the pixel level, which controls the liquid crystal alignment needed to reproduce on-screen images. Samsung's new double-sided LCD has two gates that operate each pixel instead of one, so the screen on the front can display different images than the one on the back. The double-sided display makes use of Samsung's proprietary Amorphous Silicon Gate (ASG) technology, which accommodates the increased number of TFT gates without increasing the size of the driver integrated circuits. Driver-ICs typically increase in size when more TFT gates are used.

The double-sided, dual image LCD's efficient use of light to display images in both transmissive and reflective modes promotes slimmer, more cost-effective products.

The new double-sided LCD is 2.6mm thick and 2.22" wide, with QVGA (240 x 320 pixel) resolution, and has brightness values of 250 nits for the front and 100 nits for the rear display. It will be exhibited at the Consumer Electronics Show, which opens in Las Vegas on January 8.