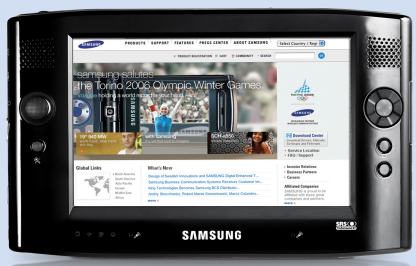 Samsung presents its new Q1P SSD Ultra Mobile PC at CES 2007 which features a 32GB solid state drive. The Q1P SSD is the most powerful UMPC model available today. Fueled by an impressive 32GB of SSD (solid-state NAND) flash memory, as opposed to the traditional 1.8" Hard Drive found in the earlier Q1 models, the Q1P SSD model is ideal for those applications that require a no-compromise, high-performance mobile computing solution that can operate in diverse conditions.

The Q1P SSD UMPC is designed for optimum performance. With the SSD-enabled model, boot time is 25-50 percent faster than systems that employ a traditional hard drive. Overall system performance is significantly enhanced, as the SSD is capable of reading 300 times faster (53 MB/s) and writes 150 percent faster (28 MB/s) than models with typical hard drives. Furthermore, seek time (the amount of time required to find information in the system memory) is greatly reduced on the SSD-enabled model. With its departure from the traditional hard drive, the Q1P SSD UMPC is equipped to withstand twice the impact of the hard-drive-enabled model. The Q1P SSD model's battery life is also improved, as it requires less power to run the flash-based SSD hard drive versus a conventional, rotational media-based hard drive.

With any of the Q1 models, it is simple for most mobile users to stay connected, entertained, and informed, but with the Q1P SSD UMPC comes the full power of a PC packed into a tiny 1.7 pound product.

Additionally, all of the Q1 models offer wireless communication capabilities that include WiFi and Bluetooth for easy Internet access. All three models also integrate the AVS Now feature, allowing users to enjoy a host of multimedia applications, including video, movies, music and still photos, without booting up Windows.

Various options for the Q1 models are also available at affordable prices, including a USB keyboard, organizer, extended battery and an external optical disc drive.