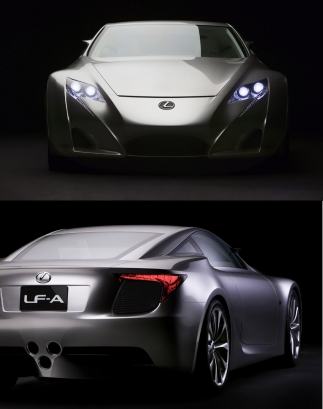 This is the last car news post for today, this one is about the Lexus LF-A. This car isn't ready yet but Lexus says its near-production, the first retail Lexus LF-A cars are expected by the end of 2008.

The LF-A sports-car concept was originally shown at the 2005 NAIAS to express a bold new direction in styling for the Lexus brand. The goals for the new LF-A are no different than they were with the original concept: To build a supercar with world-class performance that is uniquely Lexus.

As with all new Lexus vehicles, the styling of the LF-A is rooted in a design direction called L-finesse. The concept of L-finesse was used to shape and detail the original LF-A, and it was used to reshape, redetail and redefine this latest version. Lexus has further refined the styling of the new LF-A to enhance its exotic nature with a greater use of curved surfaces and interesting details.

The running gear of the LF-A is just as it was with the original, powered by a high-revving 500-plus horsepower V10 engine. Its front mid-engine placement, along with a rear-mounted transaxle and rear-mounted radiators, allows for excellent weight distribution. The horsepower, superior aerodynamics, and revised styling makes a top speed of 200 mph not only possible but probable.

An "F" logo, indicating the vehicle's status as a part of the new "F" marque, is located on each front fender.

"The first LF-A was a pure concept, but one that we went so far as to conduct engineering analysis on," said Carter. "This latest concept is much closer to a vehicle that we would bring to market, and one in which we will be gauging consumer interest."