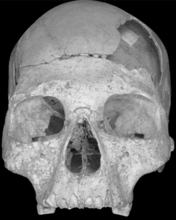 The skull bearing both older and modern characteristics is discussed in a paper by Erik Trinkaus of Washington University in St. Louis. The report appears in Tuesday's issue of Proceedings of the National Academy of Sciences.

The skull was found in Pestera cu Oase — the Cave with Bones — in southwestern Romania, along with other human remains. Radiocarbon dating indicates it is at least 35,000 years old and may be more than 40,000 years old.

The researchers said the skull had the same proportions as a modern human head and lacked the large brow ridge commonly associated with Neanderthals. However, there were also features that are unusual in modern humans, such as frontal flattening, a fairly large bone behind the ear and exceptionally large upper molars, which are seen among Neanderthals and other early hominids.

"Such differences raise important questions about the evolutionary history of modern humans," said co-author Joao Zilhao of the University of Bristol, England.