Scientists save image on one photon 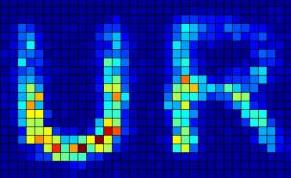 Scientists at the University of Rochester managed to save an entire image's worth of data on one photon, slow the image down for storage, and then retrieve the image intact:

While the initial test image consists of only a few hundred pixels, a tremendous amount of information can be stored with the new technique.

The image, a "UR" for the University of Rochester, was made using a single pulse of light and the team can fit as many as a hundred of these pulses at once into a tiny, four-inch cell. Squeezing that much information into so small a space and retrieving it intact opens the door to optical buffering--storing information as light.

"It sort of sounds impossible, but instead of storing just ones and zeros, we're storing an entire image," says John Howell, associate professor of physics and leader of the team that created the device, which is revealed in today's online issue of the journal Physical Review Letters. "It's analogous to the difference between snapping a picture with a single pixel and doing it with a camera--this is like a 6-megapixel camera."