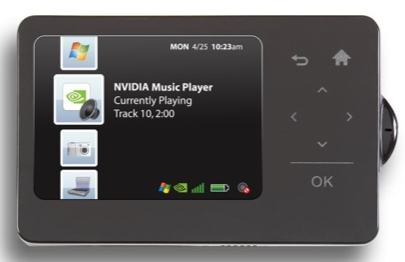 NVIDIA is going to release a new line of Preface displays that can be used by OEM manufacturers in their PCs or other media devices:

As you're no doubt aware, SideShow is simply a pretty way to access your computer's information while it's off or closed, so you can play around with emails or MP3s without going through the trouble of booting your PC.

We've already seen a couple of PortalPlayer auxiliary displays make their way into laptops such as Asus' WF5e and LG's Z1, but now things are really spicing up with Bluetooth and IR functionality in media remotes and portable players. The player pictured above, which we saw with a bit of dubious Dell branding while at CES, can not only communicate with your PC wirelessly, but can also take your media to go with a bit of flash memory.