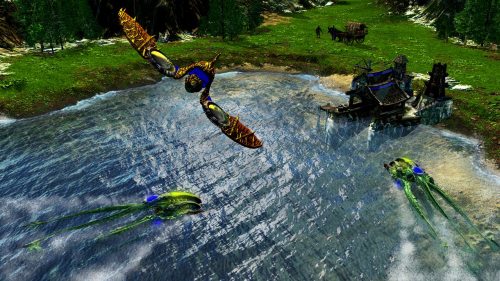 2404 had an interview with the makers of Empire Earth 3, here's a short quote:

2. What are some of the unit types players will use and are there mega weapons?

Empire Earth 3 maintains the familiar unit types found in its predecessors with infantry, cavalry, naval, mortar, siege, spies, heroes, priests (a soft spot for these as I love converting opponents’ units and throwing them back at them), etc.

This time around, playing from a global down to the territory perspective just begs for mega weapons, doesn’t it? Empire Earth 3 takes full advantage of this with additional, realized functionality from the global view. This meta-map view not only lets a player expand his empire across the globe one or more provinces at a time, manage his global economy and his provincial governors, but offers him opportunity to research such mega weapons as “Scorched Earth” (if you’re going to loose a province to an invader, make sure there’s nothing left to lose!) and “Shock and Awe” that takes carpet bombing to a new scale. That’s just from the global view. From the province view, things get nasty with the typical items of destruction such as warheads to the Quantum Singularity Gun (a “QSG” by any other name is still localized, mass destruction indiscriminant of what and whose units and structures it takes out in its swirling vortex).

You can check out the full interview at 2404.org.