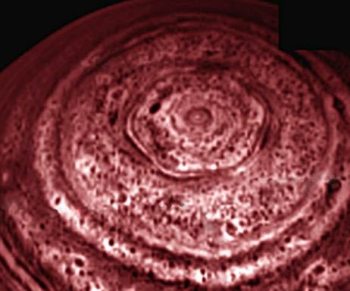 Astronomers spotted a weird weather pattern on Saturn which looks like a hexagon. This was first seen by the Voyager 1 and 2 spacecraft more than two decades ago but with the Cassini spacecraft spotting it too scientists now conclude it's a long-lasting oddity.

"This is a very strange feature, lying in a precise geometric fashion with six nearly equally straight sides," said Kevin Baines, atmospheric expert and member of Cassini's visual and infrared mapping spectrometer team at NASA's Jet Propulsion Laboratory, Pasadena, Calif. "We've never seen anything like this on any other planet. Indeed, Saturn's thick atmosphere, where circularly-shaped waves and convective cells dominate, is perhaps the last place you'd expect to see such a six-sided geometric figure, yet there it is."

The hexagon is nearly 15,000 miles (25,000 kilometers) across. Nearly four Earths could fit inside it. The thermal imagery shows the hexagon extends about 60 miles (100 kilometers) down into the clouds.