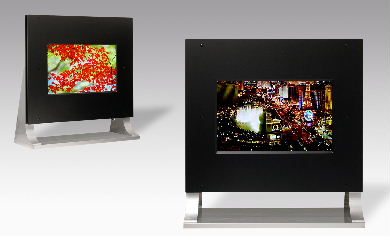 The LTPS technology, along with a uniform organic electroluminescent coating process, allows for the larger screen size to be developed. The panel produces images from light emitted by fine organic electroluminescent film formed on the glass substrate, where is can offer high contrast, fast response time, along with a wider viewing angle and a thinner profile by eliminating the backlight system.

The display also holds three RGB color-emitting layers that use polymer organic electroluminescent materials, along with an ink-jet type coating process for each color. Toshiba Matushita developed the management-of-light at the nanometer level in individual pixels to improve efficiency of distribution of light produced from the layers.

Several months ago, Sony Electronics showcased its OLED research, demonstrating a prototype of its 27-inch flat panel OLED model at the Consumer Electronics Show. Other companies, such as RiData, LG. Phillips, and Mitsubishi Chemical, have produced smaller models of the OLED display primarily for cell phones and other small screen devices. However, Ritek has since closed down its RiData OLED operation.

The biggest problem with OLED displays is the relatively short life span. Most other TV technologies hold out for more than 50,000 hours, while OLED panels are only expected to last for 10,000 hours of viewing.