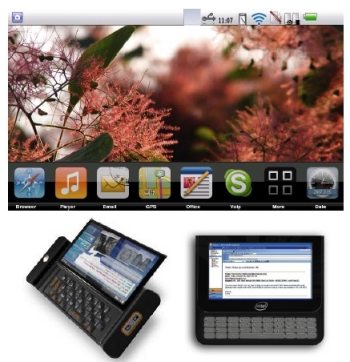 Intel presented its own UMPC platform at the IDF in Beijing.

Contrary to Microsoft's UMPC platform the Intel Mobile Internet Device (MID) is based on Linux and targeted at consumers and prosumers:

Unlike UMPCs which target mobile professionals, MIDs will target "consumers and prosumers" and feature a range of screen sizes from 4.5 to 6-inches with resolutions from 800 x 480 to 1024 x 600. Yup, these are the same devices we spotted under the in-house name of McCaslin sporting Intel's codenamed "Stealey" class of dual-core, battery-friendly processors.

Intel's reference designs run a tweaked, 500MB version of China's RedFlag MIDINUX which boots in about 18 seconds (less than 5 seconds from standby) to a mix of open-source and proprietary code including Google Maps and web-based office and enterprise applications. Data access will be provided via HSDPA and WiFi